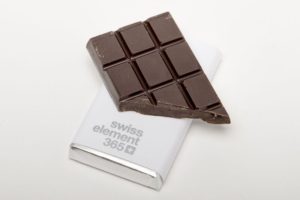 The phrase “eat your dessert first” has just acquired a new meaning as a result of a new study conducted by the Liverpool John Moores University, and reported at journal Appetite.

The researchers found that women who ate a small piece of dark chocolate just before dinner were less likely to overeat during the meal later. How much less? About 25% less. The same did not hold true for milk or white chocolate.

The results may seem somewhat counterintuitive. You would think that the sweeter varieties of chocolate are more likely to produce such an effect by bringing a feeling of satiation sooner. But it makes perfect sense if you are familiar with what’s really good and healthy in a cocoa bean.

Cocoa beans are one of the most extraordinary sources of flavanols, which are a subgroup of the natural antioxidant plant compounds called flavonoids. You will find higher concentrations of cocoa flavanols in dark chocolate, provided the chocolate has been processed correctly to preserve them. And it’s precisely the flavanols that are thought to slow the digestion of carbohydrates in the stomach, and so reduce appetite and help avoid extra calories.

How many calories exactly? About 100 per day. Women who took part in the study consumed the least amount of calories at dinner when they snacked on a small piece of dark chocolate just before the meal, only 323. Those who ate milk chocolate consumed 404 calories, and those who were given white chocolate before dinner were at 440. It is generally believed that, all things being equal, snacking on an extra 100 calories a day would add 1lb in weight every 35 days.

So, is eating dark chocolate before dinner a good weight-loss tactic? It might be, if you choose a high-flavanol chocolate and stay disciplined with small portions. This doesn’t work if you think that a Milky Way bar can be construed as an appetite reducing force. Eat more than that or the wrong kind of chocolate, and not only could you overload on sugar and fat, but you could also ruin your dinner.

The bottom line is that if you are a chocolate lover, enjoying a small piece of dark chocolate before dinner is OK. This wouldn’t put a dent in your weight-loss plans, and it may even help you from overindulging later. Pretty sweet, right?

Any questions ? You can send us an email and we'll get back to you, asap.