A Brief History of Switzerland and Good Health

Switzerland’s reputation as the ideal location to regain your youthful good health and reduce the negative effects of aging goes back for over 2,000 years. Ancient Roman soldiers, returning to Italy after fighting in northern Europe, would stop for a few weeks of relaxation and rejuvenation in Switzerland’s warm sulfur baths. In fact, the word spa is the name of a European town with a hot springs.

During the early 1700s, Jean-Jacques Rousseau, the great French philosopher, promoted the Swiss Alps as the healthiest environment in Europe.

By the middle of the 1800s, Switzerland was a center for good health with a worldwide reputation. Thousands of people came to experience the sun, clean air, specialized diets and therapies offered by the famous sanatoriums.

These days, the association between Switzerland and good health is greater than ever. Its technology and philosophy is at the center of aging well.

A perfect example of this expanding influence is Bircher Muesli, the cereal developed over 100 years ago at the Bircher-Benner clinic in Zurich. It was created to encourage people to eat more raw food, especially fruits and whole grains. It is now available in almost every country in the world.

During the early years of the 20th century, Switzerland developed a “life reform” movement as a reaction to the unhealthy lifestyle of 19th century industrialization.

One of the most fascinating groups developed in the town of Leysin, east of Geneva. Doctor Auguste Rollier created a high altitude clinic where he practiced heliotherapy. Rollier believed that sunlight was the key to good health, and his clinic attracted the world’s rich and famous, who spent most of their visits strolling around the grounds either nude or in special underwear designed by Dr. Rollier. 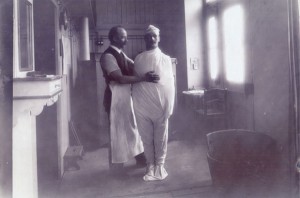 A hydrotherapy body compress was one of the treatments at the Lebendige Kraft sanatorium.

In 1956, the Hungarian Fritz Verzar founded the Institute for Experimental Gerontology in Basel, and since then Switzerland has became an epicenter for research on aging well.

Any questions ? You can send us an email and we'll get back to you, asap.